The SOLSTICE South Africa Case Study aims to address the causes of the Chokka squid fishery collapse in 2013, as this fishery has an important role as a local employer and source of protein for poor coastal communities. The squid fishery is the fourth most valuable commercial fishery in South Africa, importing foreign currency (as the entire product is exported to Europe) to one of the poorest provinces in South Africa with a high level of unemployment. Local fishermen are paid individually for their catch, with the fishery employing semi-artisanal fishermen, who in turn have >30,000 dependents. Thus, the 2013 crash had a devastating effect on the Eastern Cape. The specific reasons for the fishery collapse are unknown, with the potential for recovery unclear. Such uncertainty highlights that although South Africa is a country with exemplary fishery management structures and scientific capacity compared with the wider WIO region, it still lacks the research capabilities needed to understand ecosystem shifts that directly impact food security and the livelihoods of poor coastal communities. 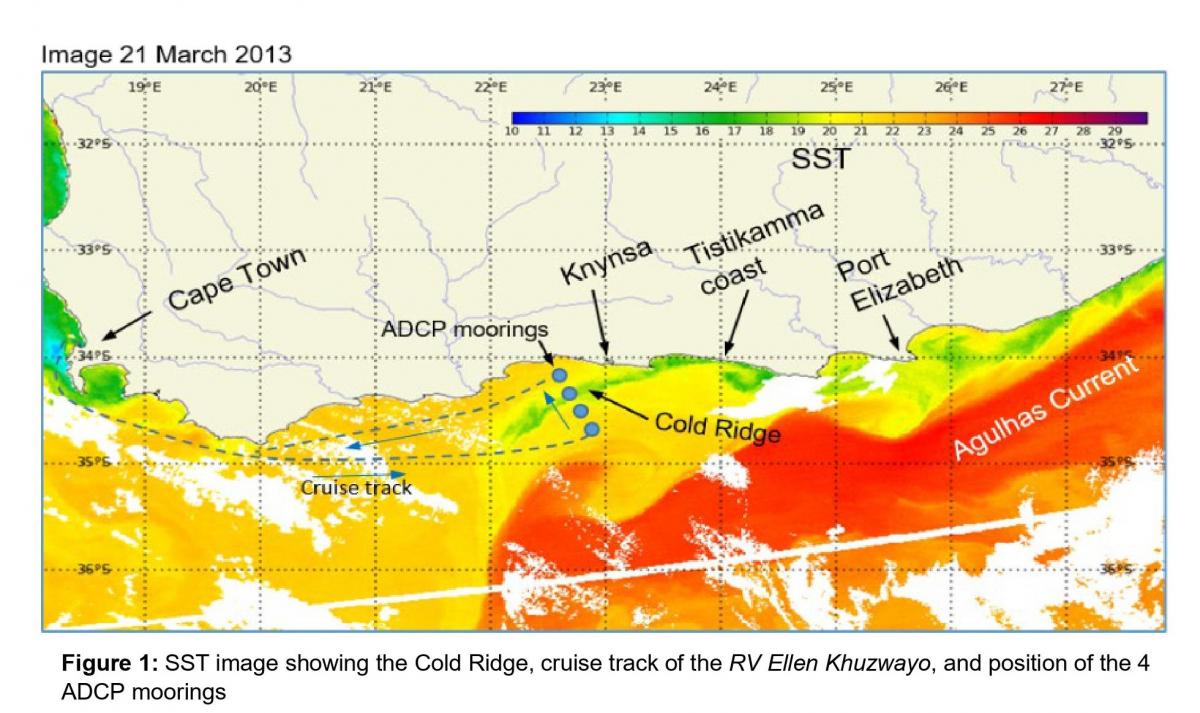 SOLSTICE will address key environmental and anthropogenic factors controlling the ecosystem dynamics of the Agulhas Bank by using state-of-the-art technologies, such as Remote Sensing, Biogeochemical Modelling and Marine Autonomous Systems accompanied with measurements from moorings and ship based research expeditions. The aim is to study the pelagic ecosystem (i.e. physical, chemical and biological parameters) over the Eastern and Central Agulhas Bank, which is a major spawning area for many commercial fisheries, including Chokka Squid. The results will help explain why the fishery collapsed, and inform the fishery and government as to whether the current recovery is stable, or whether similar collapses are likely in the future.

In October 2018 NMU conducted the first ship-based expedition on board the DEFF Research Vessel Ellen Khuzwayo which left Cape Town heading for the Cold Ridge on the Agulhas Bank to initiate field work in the South African Case Study (Figure 1). The Cold Ridge is a “banana” shape upwelling feature off the Knysna coast, and is thought to be a critical food-rich feature for the successful recruitment of chokka squid paralarvae. 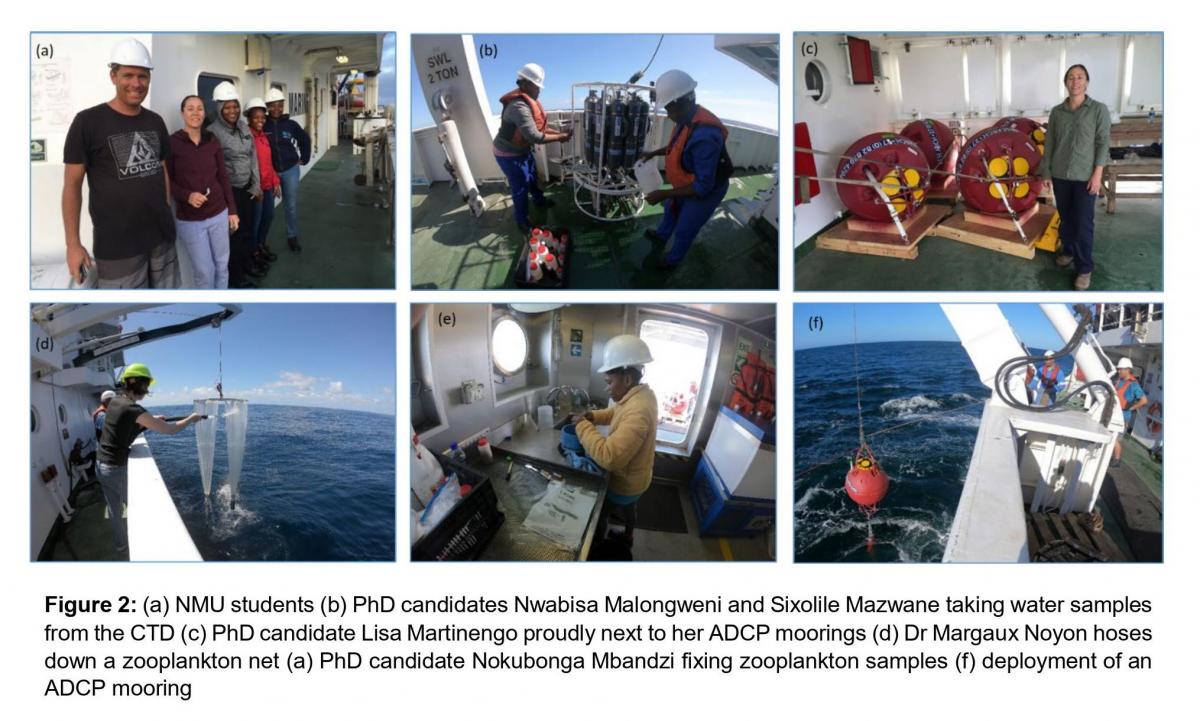 The second NMU SOLSTICE research expedition was conducted in April 2019, also aboard the RV Ellen Khuzwayo, setting sail from Cape Town on 20th March to 4th April heading eastward towards Mossel Bay and then offshore. The SOLSTICE research team included research scientists and engineers from NMU in Port Elizabeth, and from the NOC and Heriot-Watt University in the UK. The aim of this two-week survey was to provide a snapshot view of the Cold Ridge by performing measurement across 50 stations spread across the central and eastern Agulhas Bank highlighting the subsurface physical, chemical and biological structure of the feature.

To achieve research objectives, the SOLSTICE team conducted CTD casts, deployed Marine Snow Catchers, and retrieved 4 ADCP moorings. Emphasis was also placed on the collection of squid paralarvae in plankton samples to better map the spatial distribution of the paralarvae which is still under discussion amongst specialist in the field. These datasets will then be used to investigate biophysical interactions at the Cold Ridge and relate these to surface signatures obtained from remote sensing. This cruise also included recovery of three ocean gliders that had been deployed prior to the cruise. 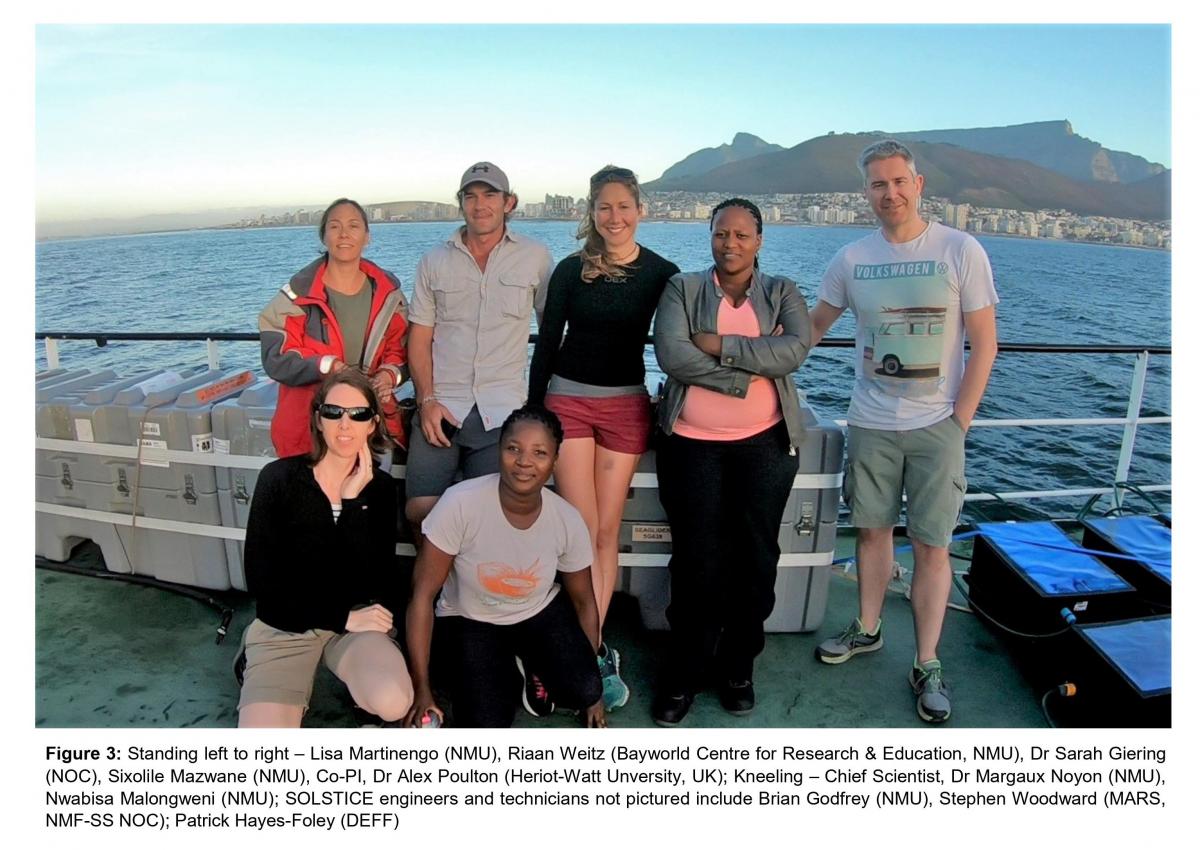 Full cruise reports can be found on the BODC Resource Page:

(Below: The RV Ellen Khuzwayo courtesy of DEFF and NMU) 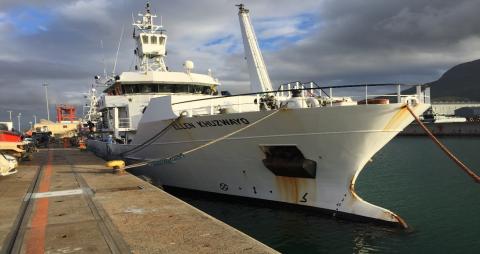